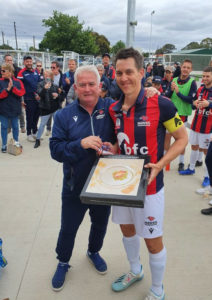 Nathan Elliott has done what very few have in the past and, on the weekend, reached astounding figures of 400 Senior games for the Adelaide Hills Hawks. The champion defender has pulled on the club strip for 20 years and with his quiet demeanor and unfaltering level of skill, is an inspiration to all at the club. At Saturday’s final match of the season, club legend and first team coach, Craig ‘Pivot’ Leith, presented Nathan with a well-earned token of the club’s appreciation for his outstanding service to the club. We are all hoping that Nathan will continue to grace’ The Nest’ for some time to come. Thank you for something truly special……… 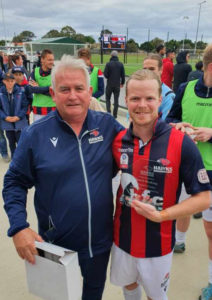 Saturday saw another club legend reach a special milestone at the Hawks. Daniel Hosking played his 200th game and was presented with a trophy by Senior Coach, Craig Leith for his amazing service to the club. Dan involves himself at all levels within the club, not only as a valued player but as an inspirational coach to the younger playing group of Junior Hawks. His deadly left foot has seen him score repeatedly over his time as a striker for the First Team and we truly look forward to seeing him on the pitch at ‘The Nest’ for many years to come.